How I Went from Normal Dude to Dumpster Diving Across America

Rob is exposing the Food Waste Fiasco of grocery store dumpsters by displaying his dumpster diving finds to the public (Image: Rob Greenfield) We’re talking 4,700 miles coast to coast (with lots of squiggles in between) on a bamboo bicycle.  I was out to inspire others to stop wasting our resources and start living more sustainably. So to lead by example, I followed a rigorous set of rules to live an extremely low-impact lifestyle.

One rule was that I could only eat locally grown, organic, unpackaged food — basically, food straight from the farmers.  But I quickly learned that America is covered in food deserts, which are places where quality, healthy food is just not available.  The alternative?

I Decided I Could Eat Out of Dumpsters

If you think about it, eating from dumpsters is extremely low impact.  It keeps stuff from going to the landfill, prevents the need to buy virgin food, and all the resources that were put into the dumpster food were already used.  A very low impact way of eating!

At first I didn’t really tell anyone about it.  I was blown away, but I was worried that people wouldn’t take me seriously if they knew I ate from dumpsters.  I was not quite brave enough to expose this truth that I was seeing firsthand.  So I kept it my little secret for the most part.

But city after city, I was finding grocery store dumpsters filled to the brim, and before long I couldn’t hold it in anymore.  I started to write about it and share what I was finding.  I just had to let people know the waste I was seeing.

After a Summer of Dumpster Diving Across America, 70% of My Diet Was From Dumpsters Rob proves that you can eat equally, if not more nutritiously from dumpster food as from the supermarket aisles (Image: Rob Greenfield)

I had rescued and consumed about 300 pounds of dumpster food in three and a half months!  At home I took a break from dumpsters, but within a few months, I was back in.  Nearly half of all the food we produce in America is thrown out while 1 in 7 Americans are food insecure.  I just wasn’t cool with that, and I learned that I could bring major attention to the issue just by sacrificing a bit of personal comfort and convenience.

So I came up with 21 gourmet dumpster meals and committed to eating 100% dumpster food for an entire week with the goal of demonstrating that I could eat more deliciously and nutritiously from dumpsters than the average American does from the supermarket aisles.  I bought a used fridge just to display my dumpster bounty, provided food to people living on the streets, and hosted a Classy Dumpster Dinner for friends and the public, all from food found in dumpsters!  Both ABC and Fox in San Diego picked up the story, and it spread all over the country.  Even my mom was watching it on her local news channel back in Wisconsin.

I decided to bike across America again, this time from Madison, WI, to New York City. I vowed to eat exclusively from grocery store dumpsters.  That’s 1,000 miles on the bike fueled by supermarkets’ wasteful practices.

I knew I couldn’t take everyone to the dumpsters with me so I had to figure out a way to bring my finds to the public.  I came up with the Food Waste Fiasco, and in nearly a dozen cities across America, I pillaged the dumpsters for one or two days and brought the bounty to a park.  I invited the media every time, and they went crazy over the story.  Here are a few scores: 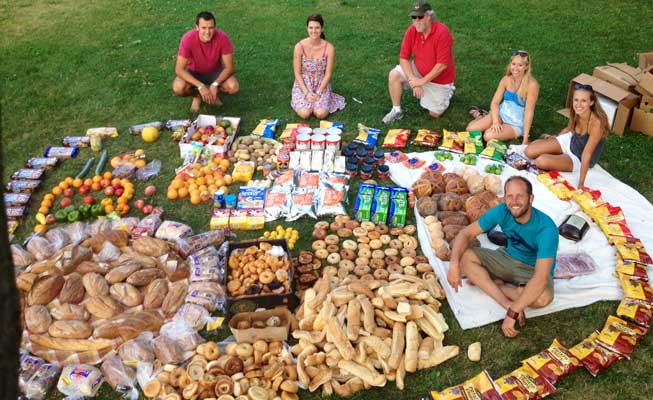 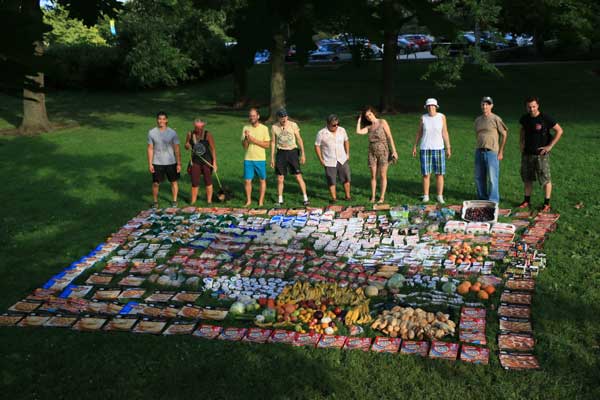 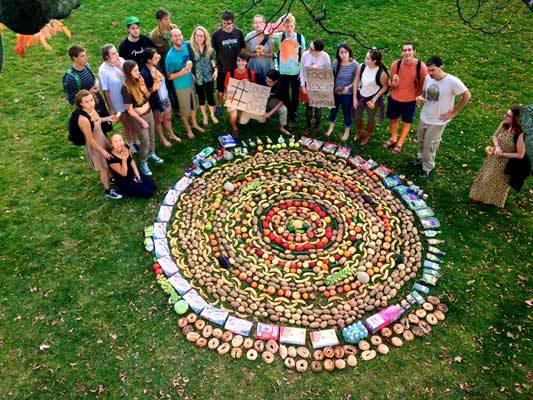 People always told me grocery stores can’t donate the food because they could be sued if someone gets sick.  I learned that common argument is a complete misconception.  Grocery stores have every good reason to donate this food rather than throw it way because they are protected from lawsuits by the Good Samaritan Food Act. They get tax write offs; they spend less on dumpster fees; and most importantly, they are doing what is right for their community when they donate their excess food! For even further confidence of safety, a University of Arkansas study shows that not a single grocery store has ever been sued!

The good news is that thousan

ds of food rescue programs, such as FeedingAmerica.org, are already partnered with stores to pick up their excess food. Many grocery stores are already donating to these non-profits and food banks. However from what I’ve seen, it is a very small fraction of what can be done.

If you think this waste of food is unjust both for the environment and our society, please join me in nudging grocery stores to do the right thing by telling them to #DonateNotDump!  You can tweet them, email them, or go into the store and talk to the manager.

What You Can Do to Stop Food Waste

To lead by example, I recommend growing your own food, supporting local farmers who tend to be much less wasteful, and making sure you aren’t wasting food yourself.  Make sure your actions are in alignment with your words! If you’re interested in learning more about Food Waste Fiasco and my dumpster diving journey, check out robgreenfield.tv.

Posting Guideline – Stories published on WeHateToWaste.com are intended to stimulate productive conversations about practical solutions for preventing waste. Information provided and opinions expressed are solely those of the contributors and implies no endorsement or guarantee by WeHateToWaste.

Rob Greenfield is an adventurer, activist, and dude making a difference. His purpose is to inspire health, happiness, and freedom on earth and he’s dedicated his life to this mission. He has cycled across the USA twice on a bamboo bicycle, went a year without showering, and has dove into over 1,000 dumpsters across America, all to inspire positive social change. When not out adventuring he lives in a 50 square foot tiny home in San Diego. His attention grabbing tactics are often a bit extreme and crazy but the messages behind them teach simple lessons that can be adapted into any life to live with more happiness, health, and freedom. Click here to visit his website and learn more.
8 Comments