Welcome to my Page about the Ottmann (and Ottman) Family in New York City, and Ottman & Company.

Here you will find information about:

The Ottmann Family  – Philipp Ottmann (1832-1876) who came to America in 1850, followed by his sister-in-law Margaretha Becker Ottmann and her 8 children in the 1860’s. The children are pictured in the portrait below, left to right: Jacob, Louis, Charles, Elizabeth, Philipinna, Katherine, Philipp and William.

This page was created and is managed by Jacquelyn Ottman (b. 1955)  Contact me at:  JacquelynOttman [at] gmail [dot] com  with questions.

The Ottmann Family in America Ottmann Family in NYC, ca 1865. All of the boys would join their uncle Philipp Ottmann in the meat business except Jacob (far left) who would founded J. Ottmann Lithographing Co the printers of Puck Magazine.

Philipp Ottmann (b. 1832), the first member of my Ottmann family to come to America, (from Meisenheim am Glan in Prussia, now Germany), arrived in 1850, and set up a butcher shop at the Fulton Market.  A successor business, Wm. Ottmann & Co. was set up by his eldest nephew upon Philipp’s death in 1876.  Thirty years later, Wm. Ottmann’s nephew opened Ottman & Company in the West Washington Market (what is now referred to as “The Meatpacking District”) in Manhattan from 1919 – 1986.

The only one of the five sons of Margaretha Becker Ottmann (pictured right) who did not make a career in the meat business was Jacob Ottmann (b. 1849).  He went on to become a leading lithographer, founder of J. Ottmann Lithographing Company. His firm built the Puck Building and printed the famous Puck Magazine, and exhibited at the Columbia Exposition of 1893.   Scroll below to learn more. Listen to the Talks below, and buy the book, “Ottman & Company: Meatpacking District Pioneers (2022).”

Click on the image below to Listen to Jacquelyn Ottman’s presentation to the National Arts Club on June 8, 2021 about her family’s storied meat purveying business, Ottman & Company, and the two family businesses that preceded it: Philipp Ottmann & Co., that operated in the Fulton Market between 1859-1876, and William Ottmann & Co, that succeeded it from 1876 – 1925.:

Click on the IMAGE below to listed to the talk Jacquelyn Ottman gave to the Village Preservation group on October 14, 2021:

Click on the IMAGE below to view the video of the talk that Jacquie Ottman gave to the Greenwich Village Society for Historic Preservation on June 7, 2016

Video link of Jacquie Ottman’s  6/7/16 Talk: Cut and paste this link into your browser if necessary:

Before the High Line, before all the tony shops, galleries and restaurants in Greenwich Village’s “Meatpacking District”, there were the meat purveying businesses of the West Washington Market. What did these firms do exactly?  Where did they go? And what did they contribute to the reputation of New York as purveyors of world class steak?

Jacquelyn A. Ottman, 5th Generation New Yorker, will answer these questions and more when she shares her own remembrance of a business that formed an integral part of her family for five generations.

Ottman, an art history maven, sustainability expert, and a ‘school break’ veteran of the business herself, will take us inside the walls of Vincent Astor’s  Arts and Crafts Style  “One Little West Twelfth Street” building that once housed her family’s Ottman & Company. She will share fascinating details about Philipp Ottmann & Co., and William Ottmann & Co., the two Fulton Market businesses that preceded it,  providing culinary, architectural, historical, cultural, and personal perspectives on NYC’s meaty past, her family’s businesses, and the lasting contribution its pioneering ways made to the way we all eat today.

She will conclude with an intriguing look at the ways the industry is preparing to feed billions of meat eaters around the world more sustainable in the future.

Unpacking the Market’s History, an article written in Our Town about Jacquie Ottman’s talk. Learn more about Puck Magazine by downloading this informative, illustrative supplement, published in 1887, the 10th Anniversary of the magazine. “Puck at Puck” — an Exhibition of J. Ottmann Lithographing’s Lithographs: In 2009, Jacquelyn Ottman arranged for her collection of Puck prints, trading cards and board games to be exhibited at the Puck Building. Watch the YouTube videos of the Puck at Puck Exhibit in Sept 2009: https://www.youtube.com/user/PuckAtPuck 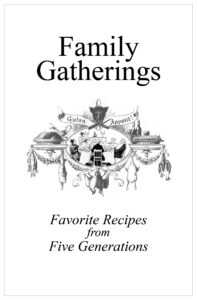 Jacquie grew up in and around NYC as the daughter of a meat purveyor that supplied meats to restaurants, hotels, and steamships back in the day.  So listen up to hear Jacquie’s wonderful story of food and family and to hopefully get inspired to put together your recipe book, just as she has done!

Purchase a copy of Family Gatherings at this link at Amazon.com: https://amazon.com/Family-Gatherings-Favorite-Recipes-Generations/dp/B0977S1YZT